The SIMPLIS Periodic Operating Point (POP) analysis followed by an AC Analysis has a proven record of quickly and accurately measuring the AC loop response of switching power supplies.  This analysis works very well for stable systems where the feedback signals are represented by double precision numbers.

In digitally controlled systems where the signals in the feedback loop are quantized into discrete levels, the POP / AC analysis is typically not applicable.  The extremely small perturbation of the injected signal during the AC analysis is not large enough to produce a control loop response.  The Multi-Tone AC analysis, available in the Design Verification Module (DVM) starting with SIMetrix/SIMPLIS version 7.1, is able to provide an AC analysis of such digitally controlled systems, including closed loop response, input and output impedance as well as conducted susceptibility.

Here is a comparison of closed loop gain and phase results from a digitally controlled DC/DC converter. 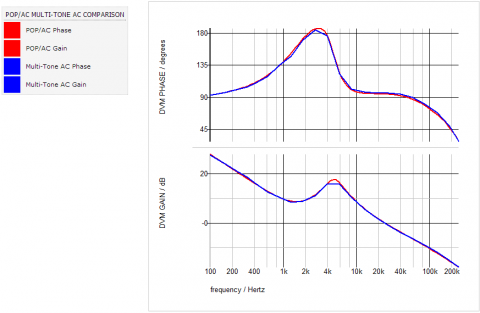 The red curves represent the POP / AC data where the PID control signals are modeled as double precision numbers.  The blue curves are generated by the new Multi-Tone AC analysis where the quantized finite bit-width of the PID feedback signals are modeled.  In both cases the PID coefficients and the power stage components are identical.

For PFC converters using an AC input and variable frequency control, the POP / AC analysis is not appropriate.  In these cases, the Multi-Tone AC analysis offers a way to characterize virtually any control loop. 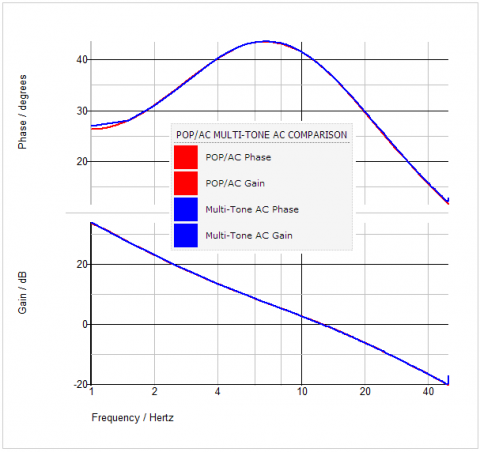 Multi-Tone AC analysis is included in the Design Verification Module starting with the SIMetrix/SIMPLIS 7.10 release. Existing DVM customers will have access to the Multi-Tone AC feature by simply updating to the latest version of SIMetrix/SIMPLIS. DVM is an add-on module to SIMetrix/SIMPLIS.
The Multi-Tone AC Analysis injects multiple frequencies into the circuit under test during a transient simulation, and then calculates the AC results using a Fourier analysis. The signal amplitude is set by the user to be large enough to insure the control loop is perturbed and there will be a valid AC response to the perturbation. Because Multi-Tone AC analysis uses a transient simulation, the technique can be applied to any converter. POP convergence is not a requirement.

Both linear and decade frequency sweep modes are available with the four Multi-Tone tests objectives that are built in to DVM: Bode Plot , Output Impedance, Input Impedance and Conducted Susceptibility. Using the built-in testplans for DC/DC and AC/DC converters, a working design can be converted to run the Multi-Tone AC analysis in 5 minutes or less.